At the welcoming remarks, President Ho indicated that HSMC and Gordon College established strategic partnership since 2013, and they share common educational ideals which include nurturing students to become future leaders through liberal arts education. In particular, he and President Lindsay have both conducted research on leadership and have been contributing to a joint column on leadership in the Education Post of SCMP. The 2nd HSMC President Forum was organised riding on their common ideals. As Hong Kong is now at the transforming or “renaissance” stage, President Ho believed that it is a time for us to explore ways to develop true leadership via liberal education.

During the forum, President Lindsay shared the key things that he has learnt through interviewing over 500 senior leaders (which included two former US Presidents) for over 10 years. He shared his past interfaces with 5 prominent leaders, namely, Colin Powell (Former US Secretary of State), Drew Faust (President of Harvard University), Shane Tedjarati (President of High Growth Regions at Honeywell International Inc), Myron Ullman (Former CEO of JC Penney) and Kien Pham (Principal of Red Square Vietnam). He consolidated 5 postures toward power, i.e. “flaunt”, “fall into”,” invest”, “prevail” and “give back”. He said that it is a natural instinct for people to flaunt when they have power in hand. Also, he explained that when leaders fall into positions of responsibility, they need to learn a whole new lifestyle. As an educator, he has been helping students to prepare for an unknown future by developing their characters and values that can sustain them when they get into powerful positions in the future. He also highlighted the importance of investing in personal relationships and figuring out ways to build up connections. He then emphasised that leaders shall prevail despite obstacles and oppositions, and be resilient in response to failures. Lastly, he raised the beauty of giving back. He added that a truly world-class leader should have the commitment to serve for the common good and bring their own personal values to make a difference to the public.

President Ho then shared his insights gained from HSMC’s weekly radio programme “President’s Dialogues with Distinguished Leaders” that he and other senior colleagues had hosted for a year. He defined what leadership and true leadership are. From his research, he identified 12 most claimed leadership qualities or soft skills. More importantly, he summarised 10 common absolute values of true leadership which include: (1) understand your personal philosophy and manage yourself first; (2) lead for a cause and with their value; (3) set the ethical tone and trust culture; (4) adopt a systems thinking balancing different stakeholder interests; (5) inspire & pull their followers, rather than push them; (6) adopt “the window and the mirror” concept; (7) be calm and responsive in the face of upset and crisis; (8) create more leaders and make sure impact lasts in their absence; (9) be stewards of something bigger than themselves, and seldom personalize what happens to them; and (10) bear heavy responsibilities that often outweigh the apparent privileges, and be willing to give personal sacrifices.

These values serve as a good reference for future leadership studies and development. To transform Hong Kong to a better place, President Ho believed that transformation of leadership values could be best accomplished via a broad-based liberal arts education approach. He embraced the values of liberal arts education, with a strong emphasis on human caring. Such values have been incorporated in the educational beliefs of HSMC.

After the two inspiring presentations, the two Presidents took questions from the floor and had a very fruitful interaction with the participants. 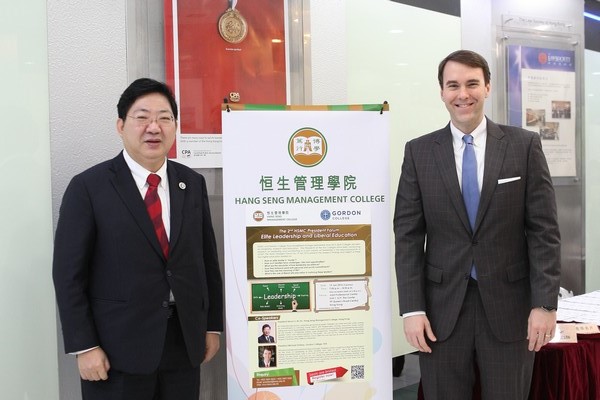 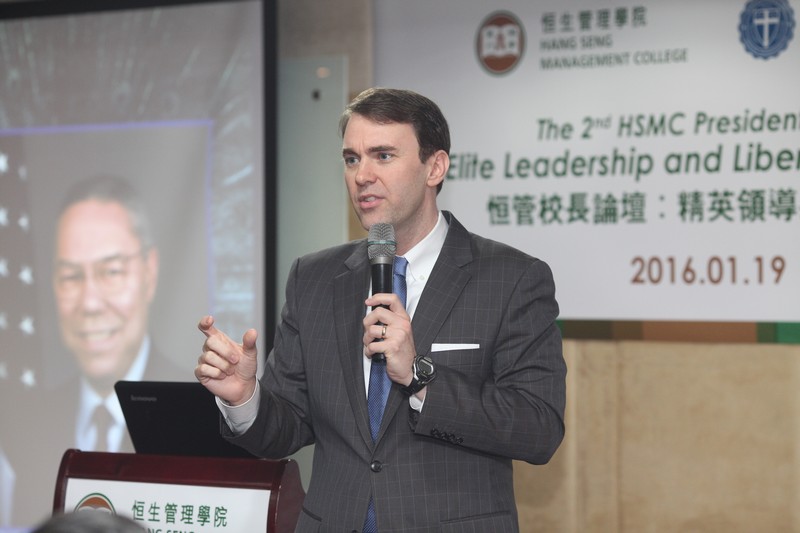 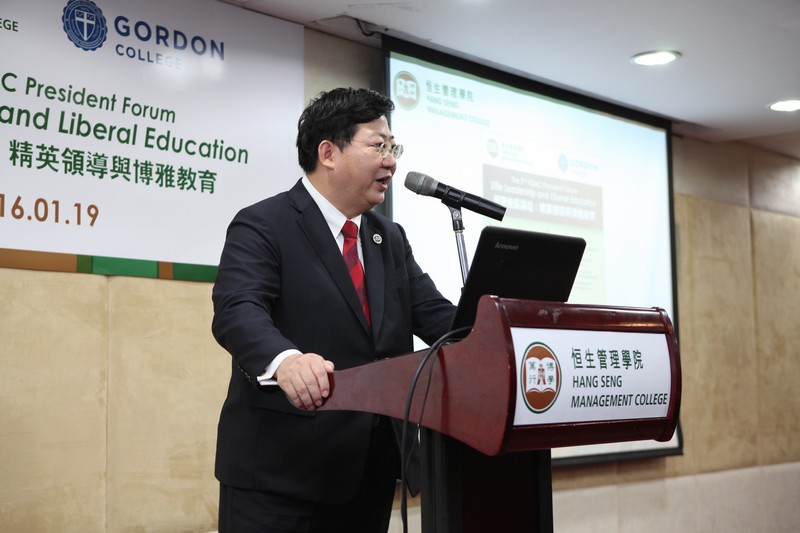 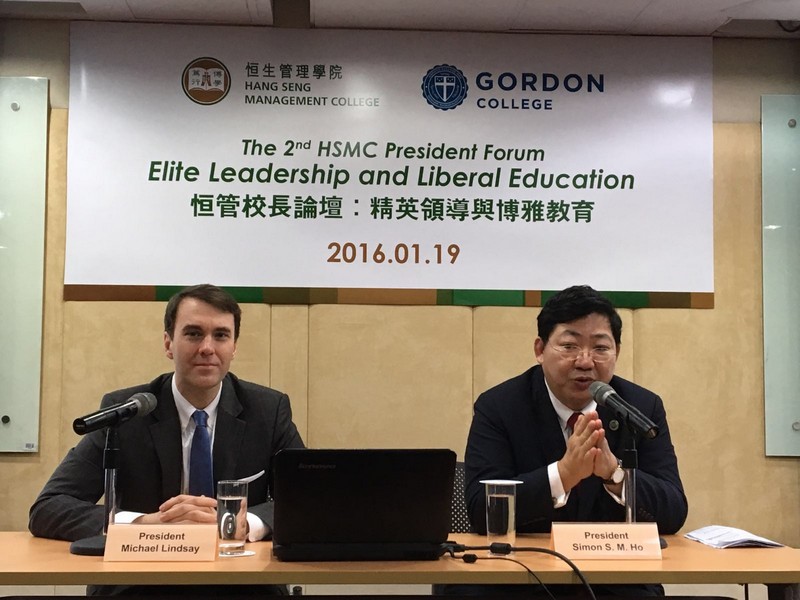 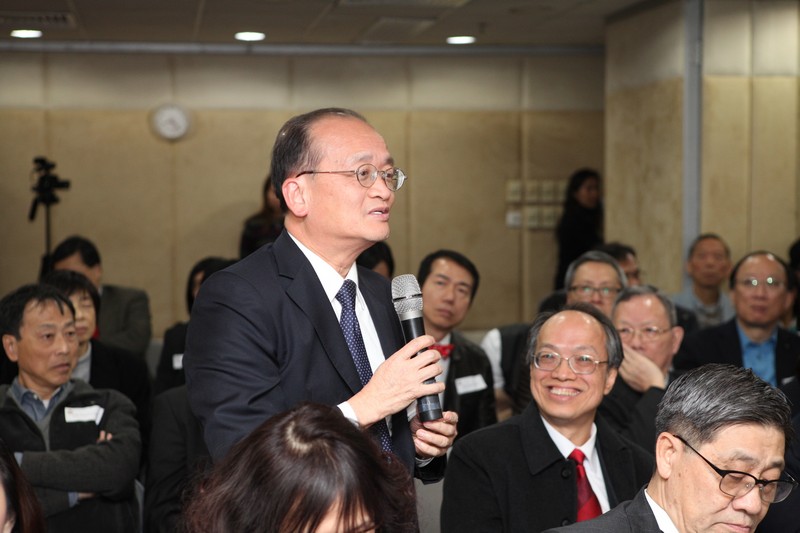 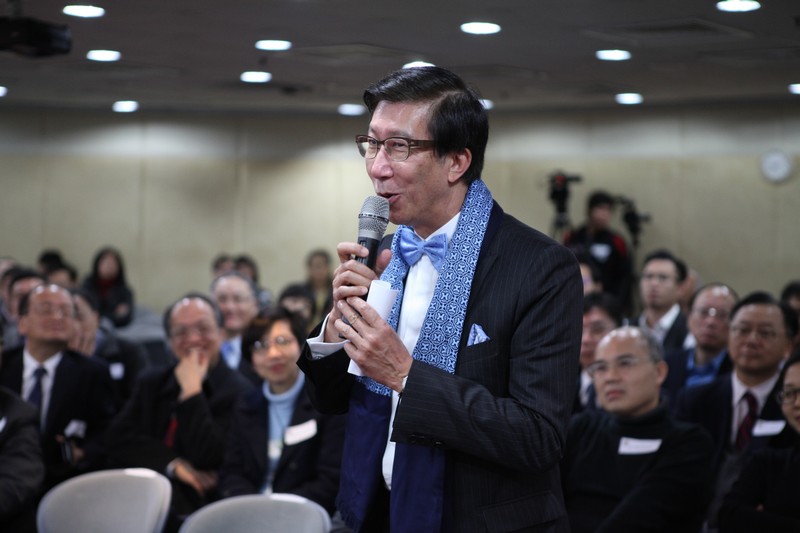 Special guests raised questions to the two speakers
WE RUN FOR “U”
Lunchtime Concert: Live Jazz